Star Line Publishing is an independent publisher of unique tabletop role-playing games and other curiosities. Our goal is to bring you quality games that aren’t quite like anything you’ve seen before, a mixture of translated Japanese games and our own original titles. 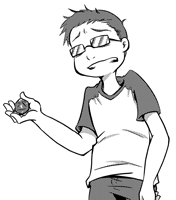 Ewen (pronounced like “Aaron”) Cluney is a translator, wannabe novelist, gamer, anime fan, and all-around geek. He’s partly responsible for Maid: The Role-Playing Game being the first Japanese tabletop RPG released in English, and he has a laundry list of weird games of his own he’s working on.

Mike Stevens has loved games ever since his parents got him a video game system when he was three. This love has carried into his career as a writer, editor, promotions manager and event coordinator for some of the largest game companies and conventions to better share his passion of gaming. He’s also partially to blame for pushing Ewen into publishing Maid: The Role-Playing Game. Some of the other games that he has worked on are Shin Megami Tensei Online, Arc the Lad, and the Tales of… series.