If you’ve been following my blog, noticing my forum posts, or talking to me in person, chances are you saw this coming.

Star Line Publishing is a joint publishing venture between me and my longtime friend Mike Stevens (with a few other people lending a hand), and I am very, very happy to announce that Star Line Publishing’s first big release will Golden Sky Stories, an English version of Yuuyake Koyake, a tabletop role-playing game by Ryo Kamiya, the designer of Maid: The Role-Playing Game. 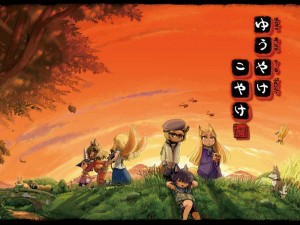 Golden Sky Stories is a heartwarming role-playing game. Players take on the role of henge (pronounced “hen-gay,” like a chicken that’s happy, not a Celtic monument), animals with just a little bit of magical power, including the ability to temporarily take on human form. They live in a little town in rural Japan, where they help ordinary people solve problems and become friends. This is not a game that will replace all of your other games, but it’s a game you can turn to as a change of pace, to go somewhere warm and safe. It is a diceless, resource-based game, and it’s meant for game sessions to last between 45 minutes and two hours.

For Maid RPG we crammed three books worth of material into one volume, but for GSS we’re starting with a thorough and careful translation of the 120-page core rulebook. It introduces the base rules of the game, lets you play as six different kinds of henge (foxes, raccoon dogs, cats, dogs, rabbits, and birds), and includes a replay, NPCs with story hooks, two scenarios, and a guide to Hitotsuna Town. We’re aiming for a very faithful translation, and the only notable change will be the addition of several pages of cultural notes. The original Japanese version has three very excellent supplements (plus a doujin supplement for, of all things, Touhou), but the main book is wonderfully complete by itself. We very much want to put out the other material, to tell the full story of Hitotsuna Town and give you many other new kinds of characters to play and meet, but one thing at a time. 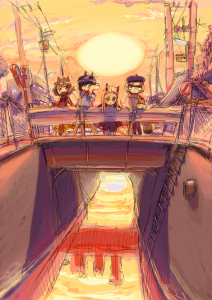 For various reasons it’s taken some considerable time to sort everything out enough to go public, so as of this announcement we’ve already been working hard on this project for some time. We aren’t yet ready to set a firm release date, but things are actually pretty far along. The actual translation and editing are already done, and our layout guy (Clay Gardner, creator of OVA) has already gotten started. We expect the book to be a little over 120 pages, and it will feature fantastic art by Ike, who has since gone on to find success with an excellent manga called Nekomusume Michikusa Nikki (Catgirl’s Wayside Grass Diary).

As with Maid RPG, I’ll be posting up previews with tantalizing details about the game and its workings leading up to the actual release. I’ll be writing about the setting, the game’s workings, and what you can expect when we do finally release the supplements in English.

If you would like to help make Golden Sky Stories a reality, we’re planning to do a Kickstarter to raise money for the first print run. We believe this is a wonderfully unique game, and we hope you’ll help us spread the word!