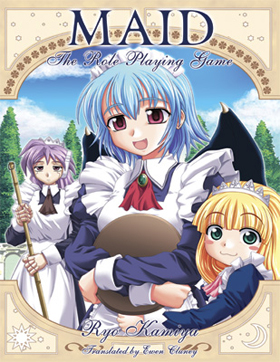 You are a maid, having worked dutifully for the Saionji family for several years. You are also a shy albino princess who does odd jobs for the yakuza, and train with the three-section staff. Your peer Maya is an outgoing young maid with freckles, a streak of being greedy for sweets, and who also happens to be a military cyborg.

Your master is a kind teenager who lives in the mansion alone, but is a bit of a train otaku. He is also a cursed werewolf. With amnesia.

Somewhere between doing the laundry and preparing lunch, the master is kidnapped by evil ninjas. They escape through the basement of the mansion, which contains a portal to the Netherworld. It’s up to you to get him back before dinnertime.

All in a day’s work for a maid!

Maid is an light comedy anime-themed tabletop role-playing game for three or more players. The very easy to learn rules-light system, complete with random events which drive the story forward, will have you playing the game with friends only fifteen minutes after opening the book. Maid is also the first ever Japanese role-playing game to be translated and released in English.